Associate Professor Lyneise Williams will be speaking this Thursday, October 28, at 3 pm for a Faculty Fellow Presentation at the Institute for African American Research. The presentation will be via Zoom, and you can register at https://unc.zoom.us/meeting/register/tJAlfuihpzooE9E0FYgNz16KoaZdxxTh7aCQ. Williams will explore the ways notions of glamour, celebrity, and masculinity intersect with race, technology, and sports in “Model Athlete: Alfonso Teofilo Brown and the Construction of the Glamourous Black Athlete in 1920s Paris.”

THE UPSHOT OF TRANS-AFFECTIVE SOLIDARITY

THE UPSHOT OF TRANS-AFFECTIVE SOLIDARITY proposes to explore a new image of humanity capable of valorising solidarity and critical knowlegde coming from different contexts and cultures. The programme takes its title from what scholar Anne Garland Mahler calls “trans-affective solidarity” that relies on a metonymic color politics. An imagined transnational, transethnic, transracial, and translinguistic affective encounter in order to envision a more economically equitable, racially just, and human-centered world. The project presents work by 8 artists of diverse nationalities who provide an opportunity to reconsider how one can imagine another collective experience that would be capable of renewing our intersubjective ties in these uncertain times. THE UPSHOT OF TRANS-AFFECTIVE SOLIDARITY approaches its subject from a variety of perspectives, one of which involves the irresistible pull of intercultural meeting points and dreams around which people converge. Most of the works embrace a sense of reinvention and agency with the aim to shape various interpretative environments. They offer an expanded frame of reference that contributes to this heterogeneous engagement with video, film and the culture of solidarity these artists encapsulate. The programme is part of the exhibition Approximationen Derivate Surrogate curated by Denise Ackermann and Frank Eckhardt. About the curator: Kisito Assangni is a Togolese-French curator and consultant who studied museology at Ecole du Louvre in Paris. Currently living between UK, France and Togo, his research interests gravitate towards the cultural impact of globalisation, psychogeography and critical education. He investigates the modes of cultural production that combine theory and practice. He inherently aims at going beyond the usual relations between artist, curator, institution, audience, and artwork, in order to engage audiences in encounters with art that are unexpected, transformative, and fun. Assangni is heavily involved in video, performance, and experimental sound. His discursive exhibitions have been shown internationally, including at the Venice Biennale, ZKM Museum, Karlsruhe; Whitechapel Gallery, London; Centre of Contemporary Art, Glasgow; Museum of Contemporary Art, Sydney; Malmo Konsthall, Sweden; Torrance Art Museum, Los Angeles; Es Baluard Museum of Art, Palma, Spain; National Centre for Contemporary Arts, Moscow; Marrakech Biennale among others. Image: Eventide, Muriel Paraboni, 2016

Annabelle and Rainey will be featured in a shared showcase “An Evening of New Work” with AhDream Smith, Grace Yannotta, Imani Williams!
These pieces will be performed in Swain Hall Black Box Theatre on Feb 11-12.
Visit Process Series UNC for more info on upcoming shows.

Back by popular demand, AIFVF returns this October with two years of incredible films. From October 15th – 24th, 2021 The Athens International Film and Video Festival (AIFVF) will present over 500 films in competition at the historic Athena Cinema in uptown Athens, OH. This year’s festival combines both the (originally postponed due to covid) AIFVF 2020 and AIFVF 2021 festivals and features an incredible array of special events and screenings.

AIFVF’s visiting artist lineup includes OU Film alumni and festival darling Tony Buba serving as the head of the documentary jury and presenting a selection of his works on Monday, October 18 at 7:00 PM. On Tuesday, October 19 at 7:15 PM, Amber Bemak and Nadia Granados, winners of AIFVF’s 2019 experimental top prize will present a solo program of their work revolving around queer love and loss, and the political ramifications of patriarchal, imperialist power. On Friday, October 22 at 7:30 PM, Sabine Gruffat will present her material driven works that cross analog and digital signals. Bill Brown will present a program of appropriated and reconfigured landscapes on Thursday, October 21, at 7:30 PM, with topics ranging from haunted houses and memorial architecture to outsider archaeology.

During the 10 days, over 40 feature length films and plethora of short films from across the globe will screen and compete in the annual festival with winners chosen by the independent jury, garnishing cash prizes and awards including Academy Qualifying status in select categories.

Founded in 1974, the Athens International Film + Video Festival has been presenting the best in international film for 48 years. Known globally as a festival that supports cinema from independent, underground, and marginalized populations, the AIFVF represents the values that we share as a community. It is a champion of justice and provides a voice for underrepresented artists and viewpoints on a global level. For over four decades, the AIFVF has embraced experimental, narrative, animation, short-form, feature length and documentary films from every corner of the globe. The Athens International Film + Video Festival is administered by The Athens Center for Film and Video, a project of the College of Fine Arts at Ohio University. This year’s festival takes place October 15-24, 2021, at the historic Athena Cinema in downtown Athens. The full schedule and ticket information is available at www.athensfest.org.

Eufonia is proud to present the second edition of Sound Circuits of Lisbon, taking place between: October 22 – 24, 2021 in the public spaces of Lisbon.

This year, 9 sound installations and artistic interventions approach different public spaces, all within a radius of 2 km from Martim Moniz – a cultural crossroads in the heart of Lisbon. Each work of art is original and specific to the location. 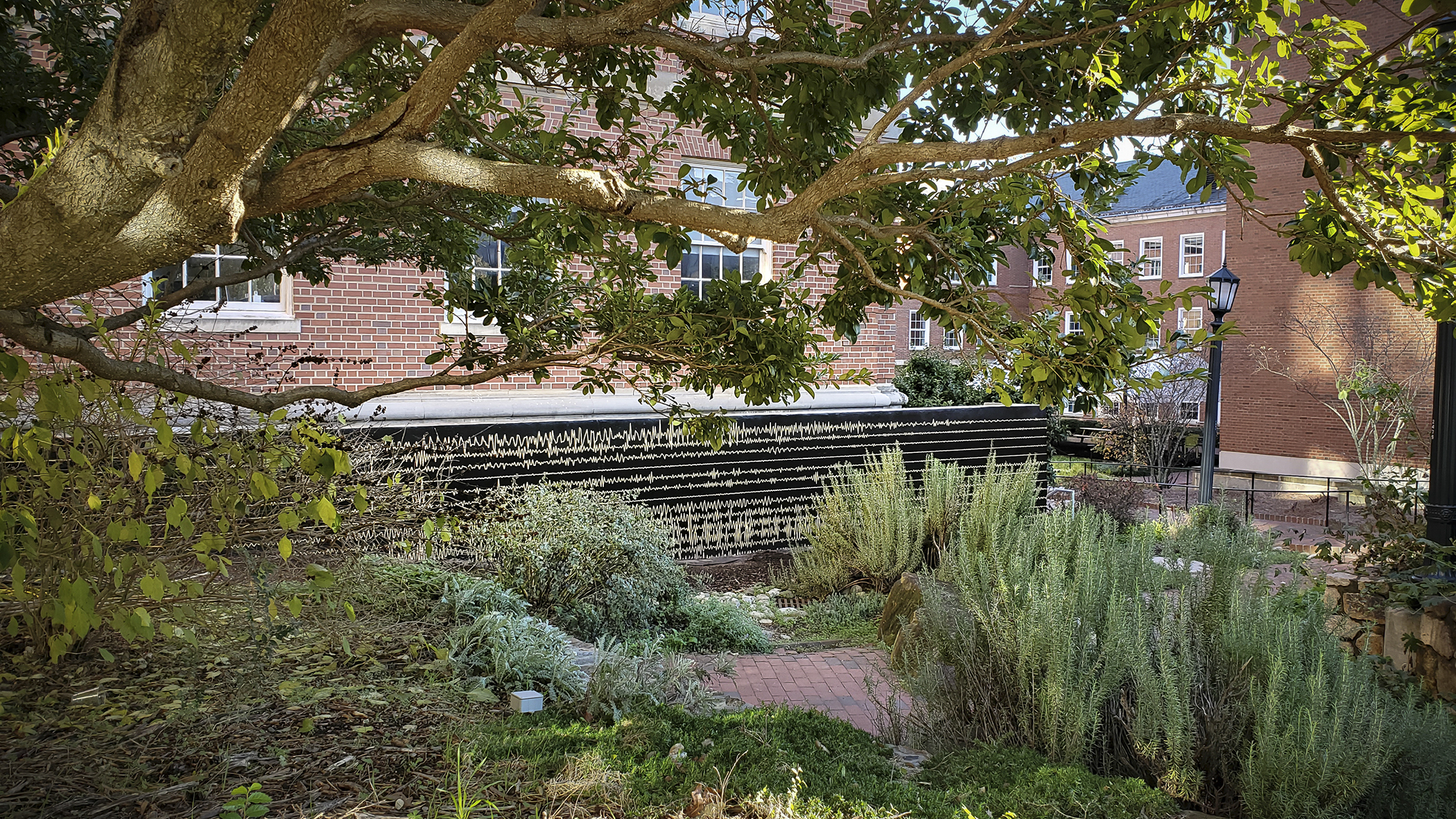 Please join the gardening and ethnobotany in academia project for an

MFA Candidate Hugo Ljungbäck has received a Maynard Adams Fellowship for the Public Humanities from Carolina Public Humanities to work on his project tentatively titled “From the Pathé Baby to TikTok: 100 Years of Amateur Media Production.” He has also been awarded the HPG/NHC Humanities Futures Fellowship from the Humanities for the Public Good Initiative to work with the National Humanities Center to expand a local UNC undergraduate humanities mentorship program to liberal arts colleges across the nation. He’s delighted to participate in these fellowship programs, to get to know his cohorts over the next year, and to continue his advocacy for the humanities.

Sabine Gruffat’s AntiBodies is a virtual reality (VR) artwork and multimedia installation that explores body dysmorphia – a fixation on perceived flaws of one’s body – and gender and race representation in the context of eating disorders and self-image. By making the experience tactile and immediate through video, digital images and virtual reality, AntiBodies conveys the compulsive and anxious nature of body image issues and eating disorders while pointing to ways media and social pressures enforce unhealthy ideals. A French-American artist who was born in Bangkok, Thailand, Gruffat lived internationally in Saudi Arabia and Hong Kong before immigrating to the United States where she is currently a Professor of Digital Art at the University of North Carolina at Chapel Hill.

Vanessa Tembane (b. 1995) is a South African born artist, with Mozambican heritage, currently based in Johannesburg. Tembane holds a Master of Fine Arts. Tembane works primarily in collage and digital print media. Her work is inspired by her mother’s narratives and explores how they have influenced her identity and sense of belonging. Her collages allow her to merge her photographs that were taken in South Africa with those of her Mozambican relatives and to create strange hybridized composites. The collages combine photographic cut-outs with details of swathes of fabric – capulanas – that were given to Tembane by her grandmother and aunts during occasional visits to Mozambique. Tembane’s collages become a means of telling stories about her origins and what is in some sense an alternative “home” culture, albeit one she mostly experienced indirectly. They enable her to identify with her mother’s country of origin by constructing new imagined memories for herself, and through this, to achieve a sense of belonging.

Senior studio art major Jason Lord participated in a summer residency with Bill Thelen’s Drawing Room NC project at Attic 506. His resulting show, The Indeterminate Geography of Wandering, will open on September 10, 2021 from 6-9 pm and then will be open for viewing from 1-4 pm Fridays, Saturdays, and Sundays through September 25. You can learn more about the show, and the Drawing Room NC project at their Instagram account, @drawingroomnc.