Emeritus Professor Mary Sturgeon’s new book The Gymnasium Area: Sculpture (Corinth XXIII.1) was published in December of 2022 and is now available for purchase.

Volume XXIII in the Corinth series is dedicated to the finds from the Gymnasium Area, excavated between 1965 and 1972 by James R. Wiseman and the University of Texas at Austin. Fascicle XXIII.1 presents the marble sculpture, 126 pieces dating between the 6th century B.C. and 5th century A.D. and found in or near a variety of built features, including the ornately decorated Bath-Fountain complex. Among the sculptural finds are portraits of athletes and civic officials and depictions of Dionysos, Hermes, and Aphrodite and the nymphs. Herms and statue bases also form part of the assemblage. This corpus grants us insight into the sculptural practices after the founding of the Roman colony at Corinth, and critical knowledge concerning display context, reuse, and the deposition of sculpture at a gymnasium in a large regional center of the eastern Mediterranean.

Ph.D. candidate Jennifer Wu will be delivering a lecture, “Metapaintings in Tudor England,” sponsored by the UNC Medieval-Renaissance Colloquium. The event will take place Thursday, January 19, 2023 at 5:15 PM in Greenlaw 526B.

As part of their Veterans’ Day focus on student veterans at Carolina, UNC Communications produced this video profile of MFA candidate Matthew Troyer. Matthew is channeling his experience in the Marine Corps to create photography that shares the military experience with the civilian population and fellow veterans.

The College of Arts & Sciences at the University of North Carolina at Chapel Hill invites applications for Department Chair and Edna J. Koury Distinguished Professor in the Department of Art & Art History, which is comprised of diverse faculty representing a range of fields, media, and methodologies. The start date will be July 1, 2023. We welcome candidates in any discipline of art history, studio art practice, or related fields with the credentials to be appointed at the rank of full professor with tenure. Candidates will be asked to articulate an innovative vision for the future of the department that values forward thinking, critical inquiry, creativity, diversity, equity, and inclusion. We are seeking candidates who have an outstanding record of research and/or artistic achievement, teaching, and service, as well as experience as a dynamic, consultative leader and administrator. The chair supports departmental faculty and staff in their academic, research, and service activities, and facilitates student recruitment, budget administration, and personnel management. We seek applicants committed to diversity and inclusion in higher education, including but not limited to recruiting and retaining diverse faculty, staff, and students. Charged with building these important relationships, the chair will work with a wide range of constituencies. The term of the chair will be four years, with the possibility for a second term, after which the chair will continue to serve on the faculty as a Full Professor. We welcome applications from individuals who may have had non-traditional career paths or who have achieved excellence outside of academia.

We welcome candidates in any discipline of art history, studio art practice, or related fields with the credentials to be appointed at the rank of full professor with tenure. Candidates will be asked to articulate an innovative vision for the future of the department that values forward thinking, critical inquiry, creativity, diversity, equity, and inclusion. We are seeking candidates who have an outstanding record of research and/or artistic achievement, teaching, and service, as well as experience as a dynamic, consultative leader and administrator.

Congratulations to the following Art History alumni who are all starting new positions!

MA alumna Julianne Miao was appointed a Curatorial Assistant for the Nasher Museum of Art at Duke University.

Congratulations to PhD Candidate Weixin Zhou, who has received a 2022 Chateaubriand Fellowship. She will be hosted by the Sorbonne in Paris while she works on her dissertation research.

Congratulations to M.A. Alumna Caitlin Swindell, who just started as the Curator of Collections and Exhibitions at the Lowe Art Museum, University of Miami! We wish you all the best on this new and exciting career adventure.

From his obituary in the Atlanta Journal-Constitution (author Bo Emerson):

Michael D. Harris, associate professor of art history at Emory University, a published author, a curator, and an artist collected by individuals and museums, has been described as a Renaissance man.

But there was at least one discipline he couldn’t master: He was bested by a fiendish reed instrument called the saxophone.

His abandoned alto sax sits on top of Rev. Dwight Andrews’ piano. Andrews, a fellow Emory University professor and an accomplished musician and composer, began teaching Harris saxophone when they were both students at Yale University.

Harris never got the knack, prompting his friend Adger Cowans, a “closet” horn player, to tell him, “Michael, give me that saxophone, you don’t know what you’re doing.”

What Harris did know was the academic study of African and African-American art. He also knew how to create his own art. One of the mixed-media collages that typified Harris’ work became the centerpiece of Andrews’ living room, a celebration of ancestral images that serves as a “family altar.” 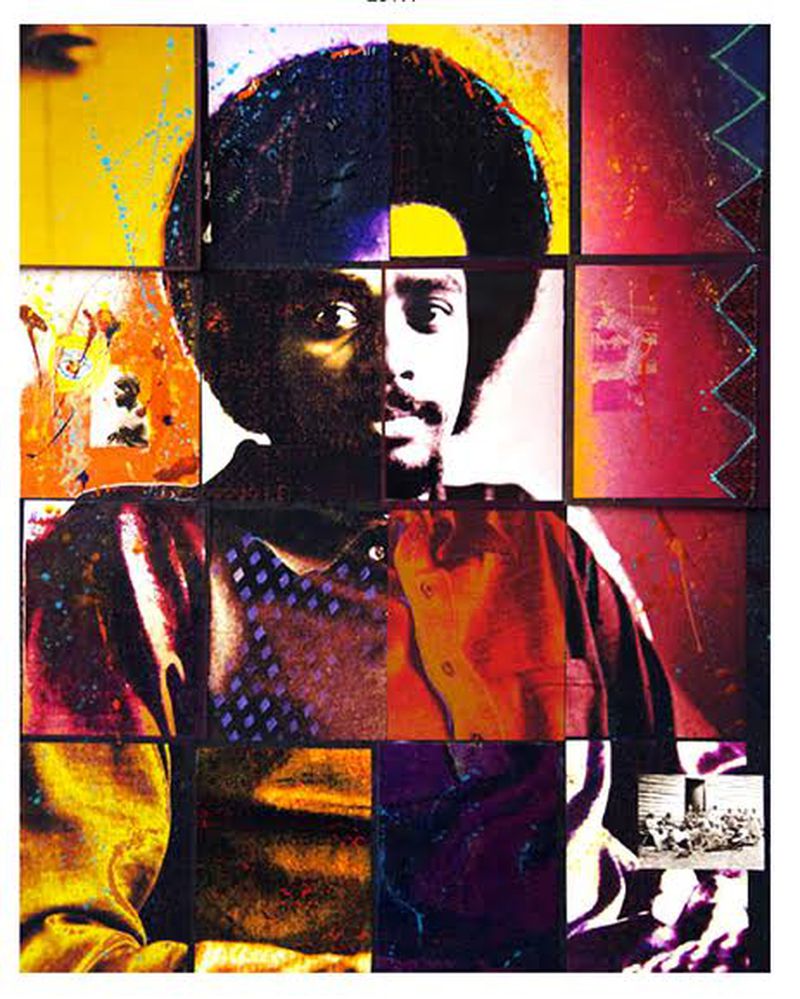 Harris’ research and writings concerning the art of the African diaspora will have a deep impact on that field, said Andrews. “He casts a long shadow over what we think about 20th and 21st-century Black art.”

Michael DeHart Harris, of Grant Park, died Monday, July 11, of a recurrence of cancer, according to his family members. He had retired two years ago from Emory but retained the title of associate professor emeritus. He was 73.

Though he was facing cancer of the esophagus, he remained resolutely in his own home, where he lived alone, up until the last week of his life. Family and friends often spent nights there to help out.

“He was a very stubborn guy,” said his daughter Dara Heard. “That is his way. When he set his mind to something, he stuck to it. He said ‘I’m going to fight this and he fought to the very end.”

Harris was a shortstop on the baseball team as an undergraduate at Bowling Green State University in Bowling Green, Ohio, carrying on a legacy of athleticism established by his maternal grandfather and namesake, William DeHart Hubbard.

Hubbard, a student at the University of Michigan, won the long jump at the 1924 Paris Games, becoming the first Black athlete to bring home Olympic gold in an individual sport.

The grandson, however, turned his attention from baseball to the study of art and art history in college and graduate school, earning a master of fine arts and eventually a doctorate from Yale.

He taught at Morehouse College, Spelman College, Wellesley College, the University of North Carolina at Chapel Hill and Dillard University before arriving at Emory.

While at Emory he published “Colored Pictures: Race and Visual Representation,” which dealt with the construction of Black identity through racial imagery, and with the response from Black artists, whose work uses and subverts those stereotypical tropes.

“It is a really important book,” said Richard Powell, professor of art history at Duke University. Another book, “ASHÉ: Ritual Poetics in African Diasporic Expressivity,” written with Paul Carter Harrison and Pellom McDaniels III, has just been released, and “Sanctuary: A Black and Blues Aesthetic in African American Art,” is at the publisher, according to daughter Shani Harris.

Powell said Harris’ legacy will be his deep and thoughtful inquiry into the intersection of art and the African American experience. But he is also impressed with Harris’ other creative output.

“The thing about Michael is he has been able to do what I’ve not been able to do,” said Powell. “There’s an interesting balance between his vocation as an art historian, but he’s also an incredible artist. He makes incredible paintings, he makes amazing photographs.”

Powell has several of Harris’ photographs and prints in his Durham house, and said “there’s not a day that goes by without me walking past something of his that brings a smile to my face.”

Said Andrews, “Michael was prolific in terms of his published work — his books — as well as his fine art. He was constantly creating art.”

Andrews added “He was always having a multidisciplinary conversation, always making connections. He inspired all of us to look for connectivity and continuity. We all found him to be a stimulating friend and colleague.”

In 1979 Harris joined the AfriCOBRA collective (it stands for African Commune of Bad Relevant Artists). The group had its origin in Chicago in the 1960s, among Black artists tired of catering to a white aesthetic.

“He kind of emphasized AfriCOBRA, as being the Black Panthers of the art world,” said fellow member Kevin Cole, Atlanta painter and educator who was invited into the group by Harris. “It was about a group of men coming together and planning their own destiny.” 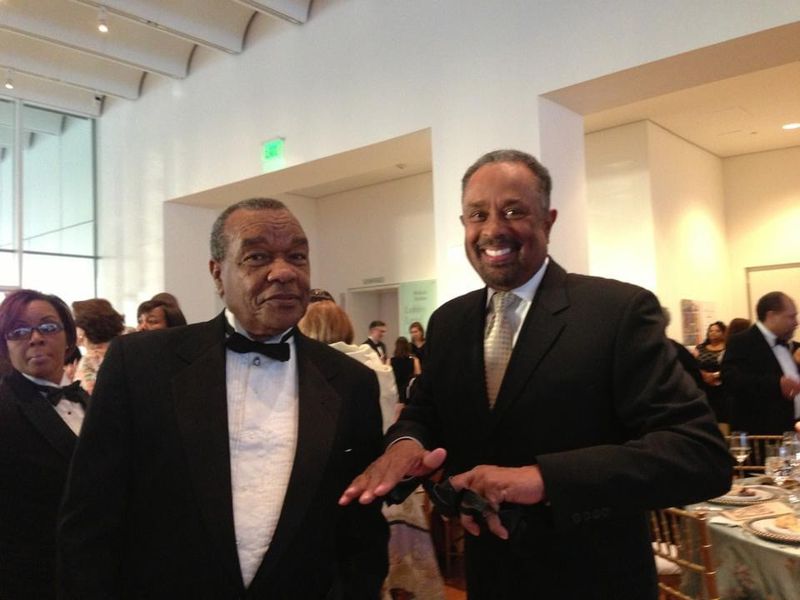 Cole is among the individuals portrayed in Harris’ images from a 2017 show called “Art Portraits of the Artist.” Staged at September Gray Fine Art, Harris’ photographs captured “the artist’s spirit,” said Cole. “There’s one of me, and the first thing everybody said to me is: ‘That’s you!’ The joyfulness.”

Cowans, who is also a member of AfriCOBRA, said that unlike himself, Harris was not a pessimist. “Everybody is selfish, they don’t give a (expletive), but Michael always looked at the best part of people.”

Harris’ daughter Dara said the setbacks in Harris’ life from casual racism didn’t slow him down. “That was something he would get on me about,” she said. “Don’t let your fears hold you back. To keep going, keep stepping, keep moving. Because that’s what he did. He was dealt a lot of blows in his life, but it didn’t stop him.”

Plans for a service for the late Michael D. Harris were incomplete as of Wednesday, July 20.

PhD Alumna Ann Millett-Gallant’s essay “Pieces of Cake” has been included in the new Routledge Companion to Art and Disability. Congratulations Ann!