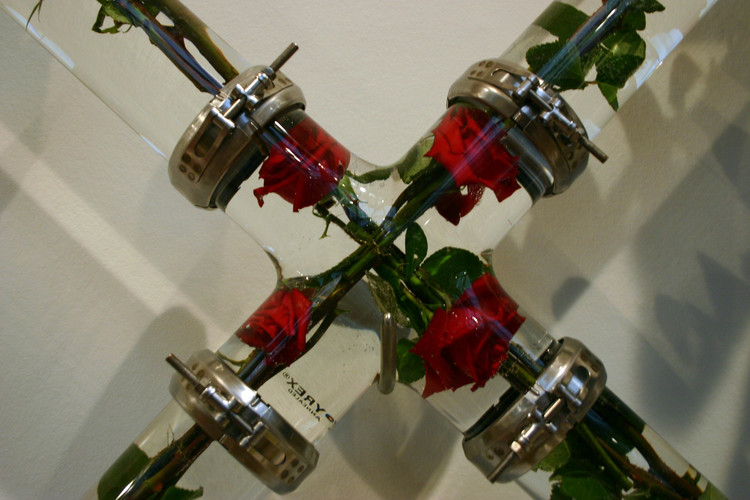 Donald Lipski is a sculptor known for his poetic combining and altering of existing things and for his enigmatic installation works.  Since coming to prominence with his Museum of Modern Art installation Gathering Dust in 1979—thousands of tiny sculptures pinned to the walls—his work has been shown in galleries and museums around the world. He is represented in the permanent collections of dozens of museums, including The Metropolitan Museum of Art, The Whitney Museum of American Art, The Menil Collection, and The Chicago Art Institute.  He has been written about extensively and is included in the college text The History of Modern Art, by H. H. Arneson.

In recent years he has created dozens of prominent and compelling public sculptures across the United States and Canada. These projects have been both overwhelmingly popular with the general public and garnered critical acclaim. Lipski’s works have been repeatedly cited by Art in America as among the “Best Public Art of the Year”.   These inventive and ground-breaking works for airports, schools, libraries, hospitals, sports stadiums, and other public sites have become icons and touchstones for their communities, and “must-see” experiences for visitors.

Lipski was born in Chicago in 1947 and grew up in suburban Highland Park, Illinois.  He studied American History at the University of Wisconsin, Madison (B.A., 1970), and Ceramics at the Cranbrook Academy of Art in Michigan (M.F.A., 1973).  He taught at the University of Oklahoma, Norman, and at Cooper Union in New York, and has lectured at more than 100 colleges, universities, art schools, and museums.  He has lived his adult life in New York City, Sag Harbor, NY, Philadelphia, and Rome, Italy. His time now is split between New York City and the East End of Long Island.

“As an heir to the Surrealist tradition, the sculptor explores how context transforms the meaning of found objects, and he possesses the knack at composing fantastical stories from unexpected combinations of materials. What sets Mr. Lipski above most others who have pursued this well-trodden path is the quirky, inventive quality to the problems his work poses and the strange, graceful eloquence of his solutions.”

An endowment established in 1983 through the generosity of Nancy and Robin Hanes supports the Art Department’s Visiting Artist Series. This important program brings both established and emerging artists to campus to discuss their work in public lectures and to offer individual critiques to our M.F.A. students.  The Hanes Visiting Artist series greatly enriches both our academic programs and our outreach to the wider community.  All lectures are free and open to the public.