Snow, Andrea C., “Dialogues with Ginnungagap: Norse Runestones within a Culture of Magic,” in Comitatus: A Journal of Medieval and Renaissance Studies 51 (2020).

Abstract: Commemorative stone monuments called runestones stippled the landscapes of medieval Scandinavia. Their upright forms distinguished them from surrounding objects and, occasionally meeting or towering over viewers, could be read as anthropometric encounters. Perplexing inscriptions that remembered the dead or fixed enchantments to a state of permanence were carved into their surfaces, enlivened further by images of strange, mythic beasts and curious masks that gazed back at viewers. Despite nearly four centuries of scholarly inquiry, these characteristics remain obscure and beguiling. What modes of thinking produced such objects? What did their bodily qualities and ethereal carvings mean to viewers? This article aims to place runestones back within the magical culture that produced them by considering their supernatural dimensions: innate corporality, potential cosmic agency, and connections to the practice of sorcery. 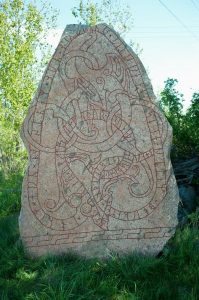